We have LOTS of miniature “ocean animals” toys in our house and I wanted to come up with a creative way for my daughter to play with them. Find out how I created this fizzing hidden ocean world – sensory play for my daughter.

When I think of oceans, I think of sand, shells, and beautiful blue water. 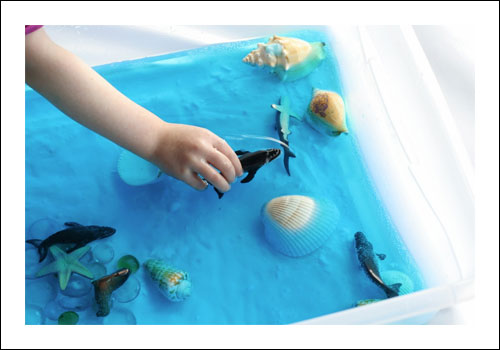 So rather than just fill a tub with blue water, I set off on a plan to keep prep and materials to a minimum and thought of the idea to make some baking soda dough and shape it like shells around several of the miniatures.

I promise that this is SUPER easy, I did it in less than five minutes. You’ll need to make the dough/baking soda shells a day in advance, though, to give them time to dry and harden. That’s the only hard part!

Once you’ve emptied the baking soda into the bowl, add just enough water that the dough is crumbly. Err on the side of too little water. Here I could have actually done a little less – so think of the below picture as showing you the maximum amount of water to add. 🙂 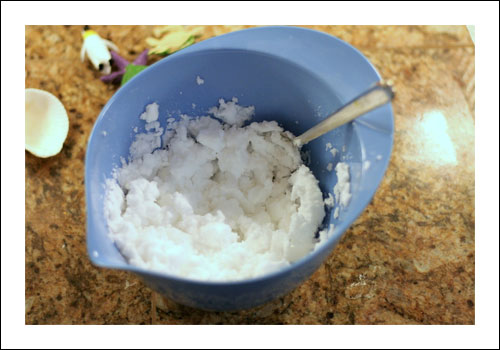 After that, I took six of the miniature toys and covered them making the general shape of a shell by hand and then rolled a real shell over them to make an shell imprint.

So for the set-up, I set out our splash mat and filled our plastic storage bin with the now dry baking soda shells, several different shells, some glass gems and the remaining miniature toys. 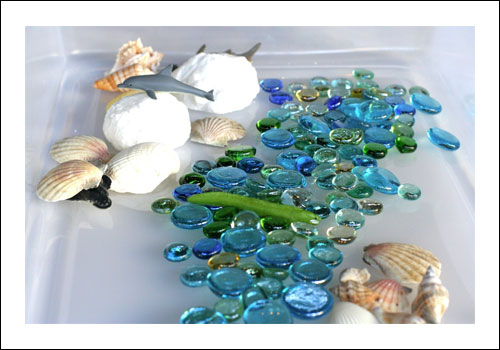 To get the “ocean” started, I provided her with four squeeze bottles full of blue water I made with 4 drops of blue food coloring per bottle (you could also use liquid watercolors). 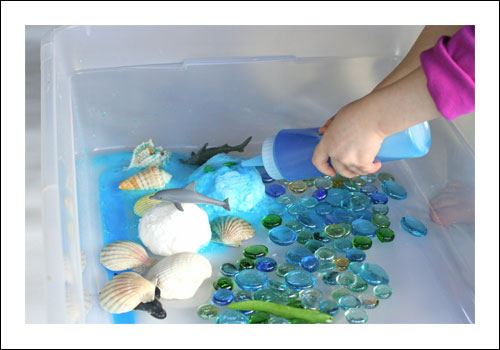 I instructed her to use the squirt bottles on the white shells to see what happened. She gleefully went to work dissolving the shells that fizzed away to reveal the hidden toys. 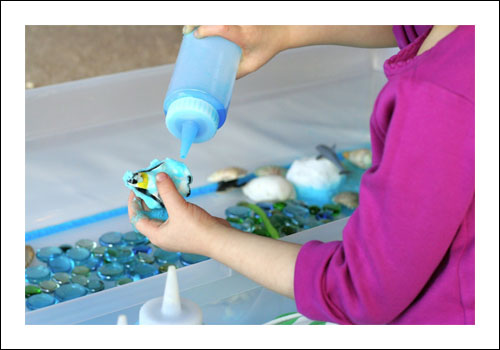 Once she was finished finding all the hidden creatures, I added several containers of water from our sink to make the “ocean” a bit deeper. After all the shells were dissolved, the baking soda doubled as “white sand” at the bottom of her ocean world. 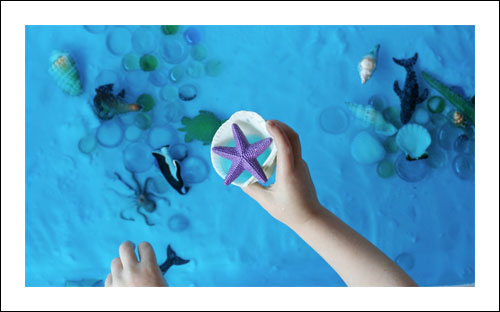 If you love this idea, you might also like our Invitation to play – Magic potions. And for more great ideas, check out our Preschoolers: Creative arts and crafts section.