Queenstown is known as a winter-wonderland and an adrenalin-junkie’s paradise, but a family holiday any time of the year – even for a non-skiing, non-adrenalin-rushing mother – is the perfect way to bond with your kids.

And it turns out there’s more than enough to do in Queenstown with kids beyond the bungee jump!

Queenstown with Kids – Beyond the Bungee

It started on a rainy morning with our budget carrier, Jetstar, which proved true to its reputation as they assigned our four-year-old to a seat on his own at the front of the plane, while the rest of us were seated down the back, even though we had pre-booked our seats.

We managed to shuffle seats with fellow passengers so we were all together and then had to ask for a toddler-extension seatbelt for our one-year-old just before take-off. Without asking, they probably would have let us fly without her buckled in.

Apart from our cheap flight, Queenstown is definitely not for the budget family traveler, but in the word’s of our four year old: “It’s a dream come true,” and well worth the splurge. 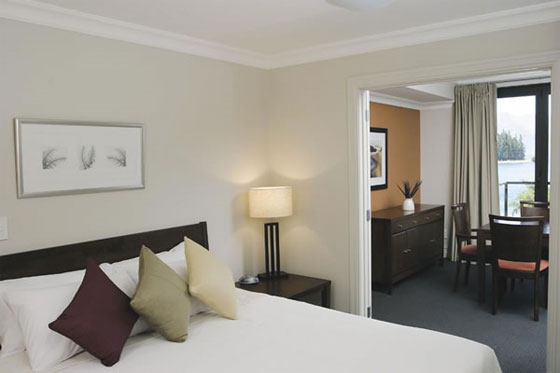 The trip from the airport takes around 10 minutes to the centre of town and for around $10 more than a crowded shuttle, you can take a Queenstown or Alpine taxi straight to your hotel.

On arrival at our two-bedroom Lakeview suite at Peppers Beacon, perfectly situated near the town and opposite the spectacular Lake Wakatipu, we were greeted with an open fire and freshly baked bread – the perfect antidote to a Jetstar flight.

On the kid’s beds were chocolates, colouring-in books, stickers and crayons to keep them occupied while we set ourselves up in the beautiful, spacious suite before we headed up the breathtaking Skyline luge to set the scene. 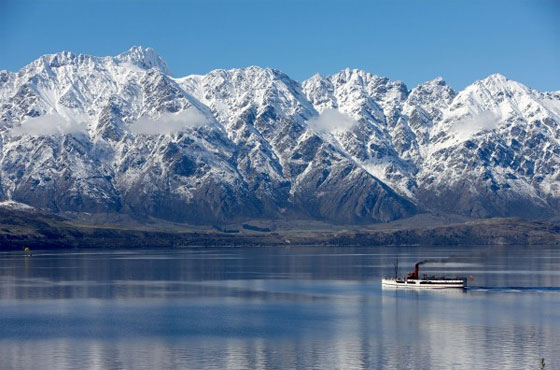 The next day we walked across the road to the wharf and hopped aboard a 100-year-old vintage steamship, the iconic TSS Earnslaw. This ‘lady of the lake’ (or ‘Puffing Billie’ as our son called her) is a must-do activity. Our four-year-old was enthralled by the men shoveling coal into red-hot furnaces and took many trips over the viewing platforms staring at the mechanisms in use.

The trip across the water to the Walter Peak High Country Farm takes around 30 minutes and is accompanied by a piano player with bandaids on every fingertip, belting out classics such as ‘Edelweiss’, ‘Roll out the Barrell’ and even a nostalgic ‘Waltzing Matilda’ — it’s rude not to join in singing, even with the most tone-deaf voice. On the way back, she dedicated some old-fashioned children’s tunes to the many little eyes watching her encased fingertips work their magic on the piano.

While at the High Country Farm, you’ll be treated to pikelets with whipped cream and jam, or delicious homemade scones, or an evening BBQ if visiting during the summer months. Then there’s a classic Kiwi sheep show to entertain. The kids got to hold a new lamb, just three days old, and it was good to see that all the sheep were calm and happy and obviously very well looked after and cared for.

A tour of the property, which has its own power generation onsite, featured feeding some of the many animals such as moose, llamas, cows and of course, the friendly sheep. A well-weathered local recounted stories of Southern prowess and superiority in an entertaining hour-long tour.

The day-trip was 3.5 hours all up, around $200 for a family of four, and a great way to start a Queenstown holiday. 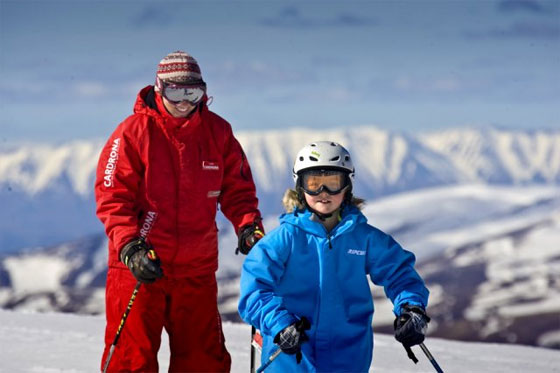 There was no more delaying, we had to hit the slopes! Cardrona, Coronet Peak and the Remarkables provide the backdrop for this snow-loving community. We chose the mountain range the furthest from town to start with – Cardrona.

It’s the perfect place for all skill levels with its four chairlifts – more than any other South Island mountain. It enjoys deep snow cover, wide-ranging terrain and friendly ski instructors to make even the most novice skier feel welcome.

It’s worth remembering that picking up ski gear is a lengthy process so don’t expect to run in and out of the shop – they need to measure up and ours took about 45 minutes. Once we had all the gear, we had to stop for a few minutes while a group of tourists decided the middle of the road would be a good place to take a photo – a cattle stop of sorts!

The drive up is pretty good, for a Kiwi ski mountain – rails on the side of the roads (important for a scaredy-mum like me!) and mostly sealed roads. Our 4WD from Hertz was an essential rental investment – especially when we drove past many cars waiting for their chains to be put around their tyres – thankfully we didn’t have to figure out how to do that!

When at the slopes, it’s a good idea for someone to be dropped at the top with the kids and gear and the other parent go back and park, otherwise, like us, you’ll be struggling in the slippery snow or will have to hop on the back of the shuttle – an open-back sheep truck.

You know you’re in New Zealand when expensive cars in the parking lot have sentiments like ‘Monty is an arse elbow’ written in the dirt across the side! 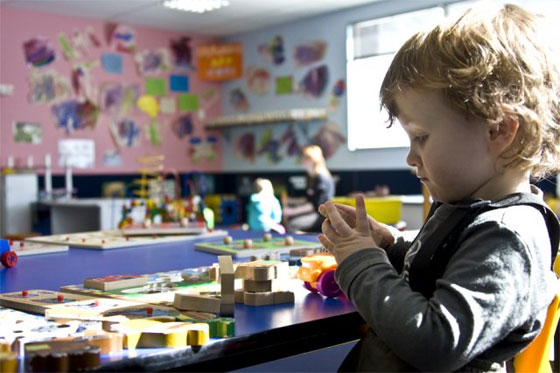 Once on the mountain proper, the first stop is the childcare centre for 3 -5 year olds to get them settled. It’s situated right under the noodle bar, which was a bit strange as you bustled past many people heading for their lunch.

For our four-year-old, a ski lesson was planned but we felt a bit sad for our one-year-old who had to stay indoors while we skied. In the car home she said ‘No fun’. Our four-year-old on the other hand had the time of his life!

After his lesson, where he managed to get a lot more competent on the snow than his mum, we took him tobogganing for the price of a gold coin donation, and he bravely tried to build a snowman out of icy snow.

Not a ski bunny! 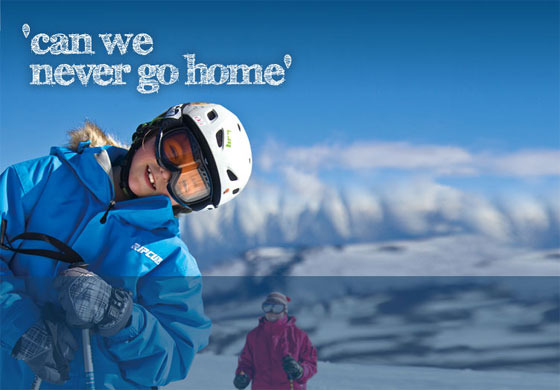 Having had a bad accident snowboarding on my only other time on the ski slopes, I wasn’t looking forward to the day at all, especially if I had to show my ineptitude in front of a hunky male ski instructor, so I was pleasantly surprised to have a female instructor from Holland. Hanneke was very patient with me as I told her I didn’t care about skiing too much, only about not injuring myself!

I had nothing to worry about, a few ‘pizzas’ and an easy run on the Poma’s and I was off!

Not one fall, apart from when I waved goodbye to Hanneke then attempted to get my skis off without her guidance! I didn’t get to try the chairlift but by the end of my lesson I wanted to stay at Cardrona for a month – it’s true what their pamphlets say: “Can we NEVER go home!” 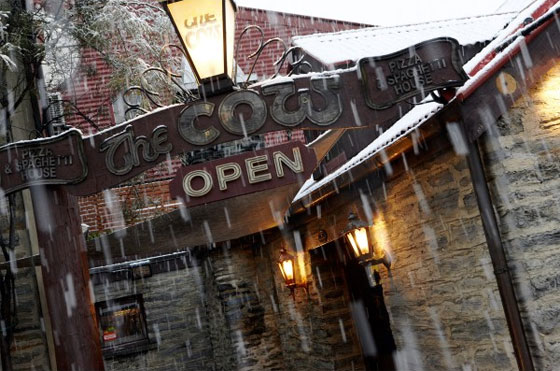 Apparently, you’re not considered a local in Queenstown until you’ve been living there for thirty years. While there doesn’t seem to be many locals in town, there are plenty of great local places to eat.

We passed by FergBurger a few times before braving the crowds to see why they were so popular. They are without a doubt the best burger you will ever try.

The Cow (a cosy restaurant situated in an old, disused cow shed) is quite an experience for the kids. It has the best pizzas in the world, friendly staff, a pizza chef on show to entertain the kids and chalkboards in the bathrooms for them to leave their mark! A meal for four was around $80, just have an early dinner as it gets very crowded from 6pm and you have to share tables.

Patagonia Chocolate Shop, situated on the wharf, is an icon of Queenstown. But be warned, their kiddie cones would be hard for an adult to eat and there’s a 20-minute wait for coffees. They do have a chocolate fondue with a selection of breads, figs and fruit that will provide a pretty healthy snack for any toddler, albeit dribbled in the finest chocolate. Take home crunchy rice bubble and white chocolate or sugar-free dark chocolate macadamia slabs… yumm!

Wherever you eat, there will be a nod to the southern style and the ski-atmosphere. Even the fish and chip shops pay homage to being in the winter wonderland by offering mulled wine while you wait!

One thing we noticed was a lack of supermarkets or corner stores for things like milk, nappies and other essentials. After a few days we discovered they were often quite camouflaged so as not to make it too easy for tourists to stay in their hotel rooms and cook for themselves (that’s my conspiracy theory at least). We did discover Fresh Choice supermarket, who delivered everything ordered over the phone for just $6.

No trip to Queenstown would be complete without some sort of hair-raising action. For little ones the Shotover jetboats totally fit the bill.

These days there are quite a few operators, but we chose the original Shotover Jet. This racy red boat captured the imagination of our four-year-old and he showed he was braver than his mum by jumping aboard with his dad and loving every minute of the bumpy twists and turns through the breathtaking Shotover River Canyons.

I was content with my trip up the Skyline Luge with its steep incline and vertigo-inspiring views. The reward for my mild courage was a great cup of coffee at the top! 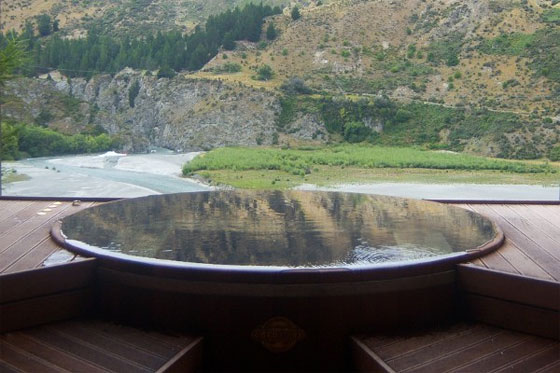 After the jetboat, we soaked up the view at the Onsen Hot Pools. From our soothing hot pool we could watch the Shotover Jet flying past. It’s very family friendly and the kids loved pushing the button to make freezing cold water shoot from the roof into the pool. They also experimented with raising the roof and switching on the bubble jets.

It’s a private sanctuary that takes away any skiing aches and pains, or just restores a holiday-weary soul. Just remember that from 2-3pm a helicopter flies overhead to pick up river canyoners – can be a bit noisy at that time, but exciting to watch.

Too lovely to leave

Our luggage was lighter on the way back – we’d brought toys and books that we wanted to leave behind – and we arrived at the airport in time for the best breakfast food ever from an airport café, and a surprisingly great Jetstar flight home.

Queenstown is everything you’d expect – picture perfect landscapes, enthusiastic locals who love their environment, fine food and wine, a never-ending supply of activities for the kids, and so accessible and easy for families to get around. The sign as you leave says: “Queenstown, too lovely to litter”, I think a more appropriate sign would be: “Queenstown, too lovely to leave.”