We love nothing better than a good old family road trip. Getting out on the road with a purpose makes the experience even better. Especially if we can make it educational and fun for the kids. As it’s Whio Awareness Month, we decided to get out on the road in search of whio!

Whio have a lot in common with eels on the threatened species list. They live secluded lives in rivers, they’re not as well known, much less visible and certainly less talked about; dare I say it, less loved, than some of our more popular native animals. Yet, just like the eel, whio live in a fragile ecosystem, just clinging on to existence.

And while they deal with the same declining river quality and loss of habitat affecting eels, they also have to fend off rats, stoats and other unnatural predators.

They really have got it it tough.

And with only around 2,500 whio left in the whole entire world, it’s really important for us to teach our daughter a little bit more about them.

Unlike many other ducks, they’re one of only 4 species that live on fast flowing rivers. Unfortunately that means they’re vulnerable to both our declining fresh water quality, and habitat loss. It also makes them harder to conserve. The whole river system, from the mountain to the sea, needs to be predator free for whio to thrive.

To get an idea of just how hard conservation is for the whio. Research in the Urewera forest has shown 90% of whio nests failed in an area without predator control. Yikes!

Wild populations of whio live in the Urewera forest, East Cape and central areas of the North Island, as well as along the West Coast of the South Island. They were once widespread right throughout New Zealand.

The really cool things about whio include:

We’re really lucky in wellington to have a number of whio-spotting opportunities within a few hours drive. One that we’ve been talking about for ages is Pukaha Mt Bruce.

Pukaha Mt Bruce is just out of Masterton, and an easy drive from Wellington, Napier or Palmerston North. You can easily drive there and back in a day from Wellington. We decided to stay over a couple of nights though, and stayed in Mt Holdsworth, right on the river (which was lucky as the summer temps hit 28 degrees that weekend!).

The Pukaha Mt Bruce Wildlife Centre was designated a forest reserve by the government in 1889. And conservation breeding has been taking place at Pukaha Mt Bruce since 1962. This small remnant of indigenous forest is a real treasure. It’s hard to believe that most of the Wairarapa once looked (and smelled, and sounded) like this. As soon as you walk through the visitor centre and across the boardwalk, you feel the ancientness of the forest all around you.

Because we’re absolutely rubbish at getting the kids out of bed, fed and into the car in anything less than 2 hours, we arrived later than planned. Even in the middle of the day the bird sound was still loud, so I can only imagine what the dawn chorus sounds like at Pukaha.

The first thing that surprised us was the quality of the graded paths through the bush. A retirement village excursion was there at the same time as us, and those in wheelchairs and walking frames, had no problem getting around. It was great to see our 14 month old enjoying the same environment as some 80+ year olds!

The first stop was into the kiwi enclosure. We walked into the dim light, and our daughter points right in front of her face, and says, ‘look Dad, there’s a kiwi!’. We carried on a bit further and there was ‘Manukura’ the little white kiwi, right there. What a great start!

Then it was on to see the eel feeding talk. Now we knew that eels grew big, but you’ve not seen an eel until you’ve seen a Pukaha Mt Bruce eel! These things were monsters, and the kids couldn’t get enough of them. So cool to see these beautiful fish up close, and in a feeding frenzy! 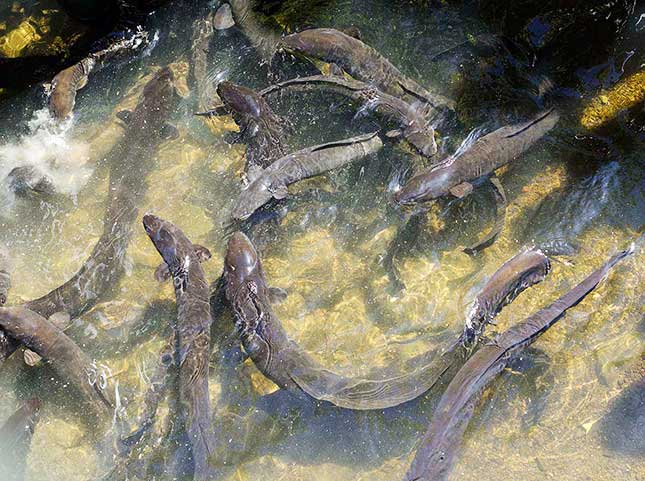 After this we headed to the free flight aviary to find the whio. This is a great little enclosure with a really successful breeding facility. This year they’ve successfully bred 16 whio ducklings. These chicks will go on to add to the wild populations around the North Island. It’s so great to know that a visit to the Wildlife Centre helps this awesome breeding effort!

Check out the Pukaha Mt Bruce website for all the whio-related activity on this month.

At this point the sun was literally melting the kids. So we headed back up to the visitor centre for the ubiquitous icecream stop. The kids loved the indoor interactive exhibitions too, especially the secret creatures tree…

Then it was back into the bush for the kaka ‘circus’. Once everyone left after the kaka talk, we hung around just watching these awesome birds flying and feeding all around us. Really magic.

By this stage we’d been at Pukaha for almost 4 hours. We couldn’t believe it. We still hadn’t seen the whole wildlife centre, let alone taken the 2 hour bush walk. We’ll definitely be back for more!

Where else can I find a whio?

There are captive whio and whio rearing facilities close to most main centres. And there are a number of active whio recovery sites within a few hours drive of most places. You’re not necessarily going to see a whio in the wild. They tend to live toward the upper reaches of river systems. They’re also a shy and plucky little bird, so will see you long before you see them.

The Whio Forever site has a Find a Whio map showing all of the locations near you.

There’s also an amazing competition being run for Whio Awareness Month. Just upload a pic of your family’s best ‘duck face’ to enter. The prize includes flights for the family to a whio recovery site, car hire, accommodation, spending money and the chance to join a real Ranger, out in the wild, finding whio! Pucker up to win a whio wilderness experience here. 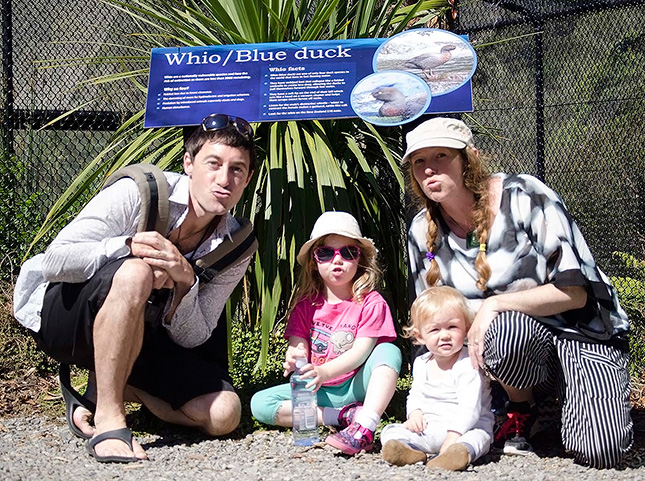 great article, I had never even heard of this bird I am embarrassed to say