Making meal times easy for kids shouldn’t be so hard! This easy meals for kids article is packed full of tips for introducing kids to new foods, without the fuss.

Where to start? I believe that starting the relationship to food as you mean to continue with your kids is the only way forward.

After the initial weaning stage of only fruits and veggies, transition them to modified versions of what you eat (modified = no salt and less spice).

Of course this is providing that what you eat is actually healthy – if not cook healthier options for your kids!

Make time to sit and eat with your children frequently, daily if possible. It makes a huge difference to what and how much they eat.

They do just eat better with company, it makes the meal time more enjoyable – even more fun for everyone once they can talk!

This could be on it’s own, sneakily given with a wink off the chopping board, or at the table with an eggcup of hummus, guacamole or homemade cheese sauce.

Try an olive dish – those small, long, narrow ones or ones that look like a snail curling around – with peas and corn, or cherry tomatoes that they’re allowed to eat with their hands…

Or even try an ice cube tray filled with all sorts of brightly coloured, fun veggies.

Make a real game of this. Sure, they won’t devour the dish of veggies just because it’s presented differently. But they’re much more likely to try a few, and that’s the key. 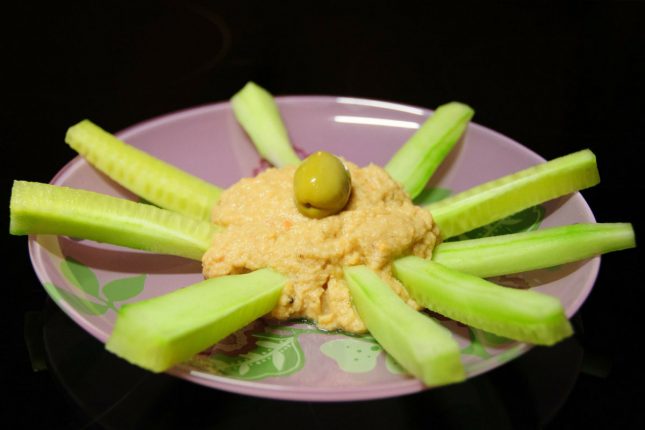 Figure out if they prefer the crunch of raw veg or lightly cooked for the easier chew.

To encourage chewing harder fruits and veg, I usually start by eating an apple with them and ask them to listen to the sound of the crunching…

I make it fun, and then whenever they eat something like carrot or a slice of pepper/capsicum, I’ll work through it with them and say “it’s crunchy, just like an apple”, that’s if they haven’t finished the sentence first.

Kids usually like apples, so combine that with a fun experience of chewing it together. This gives them a healthy association with crunchy foods that have a different flavour they might not be used to – and if they don’t like it, they’ve at least given it a try.

If at first you don’t succeed…

I guess the thing I’ve always done is to have a child try a food at least once. And if they don’t like it they don’t have to have it again for a while.

I find this works really well.

Our simple rule is that they’re not allowed to spit it out, but I genuinely won’t make them eat any more. If I have to, I remove it from the plate. This builds trust.

I also make sure it’s only a small amount so that they don’t gag or get upset about it.

If they don’t like it, I try to get them to explain what it is about it they don’t like, if they can. I also try to make this experience fun, and not attach any significance to it if they don’t love the new food.

Then, try it again in a few weeks, and again a few weeks later. If they really don’t like it, leave it alone for a while, and try at some point in the future.

Sometimes they just say they don’t like it, but actually it’s just not their favourite thing. So adding it to the plate from time to time without any pressure can let them start to explore the taste in their own time.

Don’t be afraid to offer things to your kids that you don’t think they’ll like.

When I was a live-in nanny, I would make a juice first thing in the morning and often the boys would have a little. They never had a large glass, but they probably had about 100-150mls, which is a lot of carrot, beetroot, celery, cucumber, lemon and ginger for a small boy, and for breakfast no less!

Offer things that are considered adult flavours (without salt) and I think you might just be surprised. Kids love fresh flavours as much as we do, so give it a try.

Going back to that illicit treat idea, there is nothing more inviting than a parent’s plate of food that’s different to the child’s – sometimes even when it’s the same!

Let your child try and share your food, you can add a bit extra to your plate, or go back for more later… but this is how kids venture out of their safe zone with food.

Maybe you look away and they take something, or you offer some food from the ‘big fork’. This is a great way to encourage them to try something new.

And if they like it, next time serve it on their plate saying, ‘this is that awesome vegetable you tried off my plate the other night, that you loved!’. I know, cunning right?

I love using the freezer to stay on top of having easy kid’s meals to hand.

Check out the recipes below for some freezer options I’ve used over the years. Some you’ve probably seen before – I’m not claiming they’re my ideas, rather they’re ideas that work for kids.

You could make and freeze homemade tomato sauce, homemade hummus or guacamole in ice cube trays (then transfer into labelled freezer bags). You can then defrost and fill an egg cup with that for dipping. Kids love dips; dips and sauce.

Try filling an ice cube tray with fresh juice and add berries or slices of fruit, pop in half an ice block stick and freeze. The perfect size, and thoroughly enjoyable!

They can be transferred into a ziploc bag once frozen.

I also saw on Facebook the other day thick slices of kiwi with a lollipop stick poked into them… frozen!

You could even half coat the slices in chocolate for a small after dinner treat!

In my experience kids typically like either wet food or dry foods – a bit like a cat really, and it can change.

I see kids who love casseroles, juicy meats/minced with other things or a sauce, gravy added (kid-friendly of course) and devour the meal. But put out finger foods, crunchy tacos, meat and raw/steamed veg, or rice crackers, and they’re not interested. And vice versa.

This is not to say they won’t eat the other at all, it’s just not their preference.

If you have a fussy eater, have a think about what they typically are drawn to food-wise. Then offer meals that meet that need, while still fitting in with the family meal, if possible.

One family I worked for had 3 kids, they all ate broccoli – it was just that one ate it only raw, one ate only the stalks cooked and one ate only the head cooked… It required a bit of forethought, but served to each kid’s taste, and the broccoli was devoured!

Mince is easier to chew than slices or cut up pieces of meat.

I find that around 3 years old kids will start to get more into whole pieces of meat, so until then, if you have issues, it might be worth considering mince as an option.

I would of course recommend the leanest meat possible.  If you’re unsure of the quality of pre-packaged mincemeat, just ask your butcher to mince any cut of meat you choose, so you can see exactly what is going in.

A few things worth noting

I hope these ideas can help you get some fun into eating if it was missing. Or maybe recognise the fun you’re already having around food in your house.

Here’s 5 easy and fun meal ideas for kids to get you started:

2 bay leaves + peppercorns (remove both from milk before adding fish)

Drain off the liquid into a bowl.

In a small saucepan melt butter and add flour, stir for a minute and add milky fish liquid to thicken, season to taste.  Mix back in together with fish.

Put fish mixture into an oven safe dish, (stir in eggs if using) throw on mashed potato, and sprinkle with a generous helping of bread crumb mix.

Bake at 180 degrees celcius for around 20 mins until top is browned and the mix has bubbled up a bit through the top.

Vege oil and butter for frying

In a large bowl mix together the mince, onion and garlic and beaten egg, and season with salt and pepper.

Take large spoonfuls of the mince mixture, dip into the milk, then roll in the breadcrumbs.

Fry over a medium heat, rolling the balls around every few minutes to caramelise the outside. Fry for around 10-15 minutes. Cut one ball open, and check to see it’s cooked all the way through. Drain on paper towels.

These are fantastic dipped into sweet chilli sauce and served in a lettuce leaf.

a little garlic powder or parsley and parmesan cheese

Cut chicken into small even sized slices, coat in beaten egg, then smashed up cornflakes.

Lay out on greaseproof paper – cover with glad wrap and freeze flat, put into airtight container or bag.

Defrost and cook in oven or frypan.

Cut chicken into even sized chunks.

flour – for dusting the outside

breadcrumbs (optional depending on consistency)

Chop onion and garlic finely (or grate it), mix in with mince and add other ingredients leaving breadcrumbs until last in case they are not needed to soak up the liquid.

Make into small balls and dust with flour, squish for easy defrosting and cooking, freeze fresh and on a flat tray before putting into an airtight container or ziploc bag.

Pan fry or oven bake with a drizzle of oil.

Alright, so this one is definitely that cheats method. But it’s tasty, fairly nutritious, very filling, and so super-quick to whip up!

Boil the pasta according to the packet instructions.

Drizzle olive oil over the cherry tomatoes, season with salt and pepper, and place under the grill for around 10 minutes, or until just soft.

Drain the pasta and stir through the pesto.

Divide amongst bowls, sprinkle over the grated Parmesan cheese, and place a few cherry tomatoes on top.

Jayne has over 18 years experience in caring for children and has worked in both New Zealand and the UK. She has a vast range of expertise and can offer help and advice if you are struggling with your children. You can read more about Jayne on her website- Everything But The Stork. Jayne writes regular columns for Kiwi Families and will also answer your questions about babies and children