Of all the learning difficulties, hyperactivity is perhaps one of the most difficult for parents and teachers to manage at home.

The hyperactive child has difficulty sitting still for any length of time. He is constantly on the move. He may appear to have ‘ants in his pants’, will  have a very short attention span and is very easily distracted. He is impulsive and often acts without thinking first, sometimes hurting other children in the process.  He will call out in class, answer questions before they are completed, talk excessively and seldom finish what he has started without extra help.

At home he will have been very active as a toddler and will have been slower than others to learn to share and take turns. He will most likely have a very short fuse and  may lash out when frustrated, especially at siblings.

The hyperactive child will not be learning to his full potential and he will tend to fall further and further behind as he gets older. The untreated hyperactive adolescent will have low self esteem from failure to learn in class and from constantly getting into trouble at home and at school. He may begin to engage in more negative and/or oppositional behaviour and possibly, because of his impulsivity, end up as a young person on the wrong side of the law.

What lies beneath such a challenging behavioural difficulty, and what can be done to help? Dr Robin Pauc, neurologist and author of “ Is That my Child ?”,  states that most learning and behavioural difficulties, including hyperactivity, are caused by an underlying  developmental delay which occurs primarily in the first four months of life.

He suggests a neuro developmental assessment  and a programme of exercises designed to correct this delay and mature the brain. He also suggests dietary changes to support the child’s neurological system, such as supplementation with omega 3 fatty acids, eating protein for breakfast and avoiding sugar.

Dr Pauc says that current medical treatments such as Ritalin manage the symptoms but do not treat the causes. While medication may be necessary in extreme cases, the long term affects of these drugs are unknown.

Ritalin use in the UK has increased an astonishing 173% in a decade! 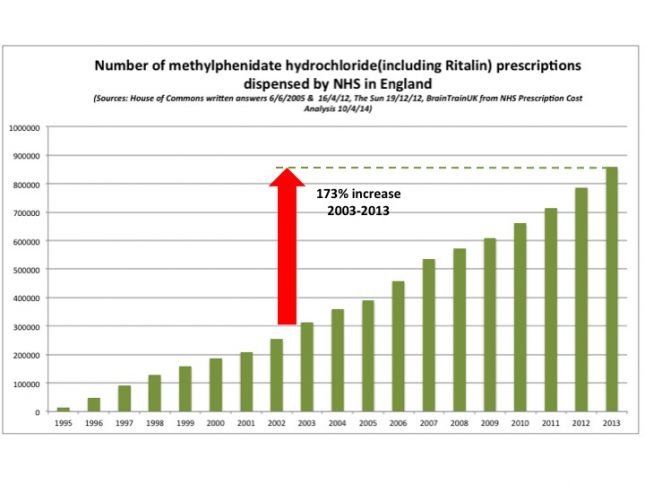 In my practice I have also noticed that most children who are very ‘overly busy’ and easily distractible, and also those with a diagnosis of ADHD and ADD,  have poor listening skills. They frequently do no understand what people are saying to them. Much of what they hear does not make sense to them.

The child who is hyperactive and very impulsive often does not follow instructions well, and may often do something completely different from what was asked of him by their parent or teacher simply because they did not understand. Of course then they get into trouble which causes more frustration because they often do not understand why.

This child may be a naughty or oppositional child, but underlying this behaviour there is likely to be an auditory processing disorder or difficulty as one of the causative factors. His hearing is most likely normal, but what he does with what he hears is not.

Not only does he struggle to process what people are saying to him, but he also may be getting too much high frequency sound into his auditory system, which causes behavioural problems such as restlessness, difficulty falling asleep at might, poor sleeping habits, anxiety and a tendency towards tantrums.

In addition, he may not be getting enough low frequency sound into his auditory system. Low frequency sound such as in cello music or Gregorian Chanting has a calming effect on behaviour and without sufficient input of these frequencies into the brain it is very difficult to relax.

All of these behaviours including poor processing of speech can be greatly helped with auditory retraining or listening therapy. Carefully selected pieces of music are filtered so that specific frequencies can be delivered in therapeutic ‘doses’ into the brain.

Both auditory pathways can be used (via air conduction through the ears, as well as via bone conduction) and when this is combined with multi sensory movement therapy the child is soon on the pathway to balance and recovery.

At home, try playing Gregorian Chanting or cello music into the room and see what happens. Most likely you will find that your child will gradually relax and become calmer, more mellow and responsive, and so will you.

Rosemary Murphy is a trained teacher with a particular passion for helping children overcome learning difficulties. She is a graduate of the Extra Lesson™ post graduate training programme and is a Registered Extra Lesson Practitioner. She is also an Integrated Listening System Professional, a certified provider for The Listening Program®. Rosemary runs the Developmental Learning Centre

Warming the path to successful learning