A rip is a narrow body of water moving out to sea like a river. These currents are caused by complex interactions between the ocean – such as tides and swell – and they are often responsible for drownings in New Zealand. Learn how to spot a rip this summer, and what to do if you’re caught in one.

Rip currents (“rips”) are one of the most dangerous elements on New Zealand beaches and Surf Life Saving New Zealand (SLSNZ) Chief Executive, Paul Dalton, says it’s vital for every Kiwi to memorise the “Three Rs” for surviving a rip before heading to the beach this summer.

“Our volunteer Surf Lifeguards across the country have already conducted a number of rip-related rescues this patrol season,” says Dalton.

“Recent data tells us rips are one of the main causes of incidents and fatal drownings on New Zealand beaches. It’s also worth noting that, over the last 10 years, 39% of fatal drownings in the coastal environment (up to 1km off shore) occurred on surf beaches, which are notorious for rips.”

A rip is a narrow body of water moving out to sea like a river. These currents are caused by complex interactions between the ocean – such as tides and swell – and the shape of the sea bed.

“The bigger the waves coming into the beach, the more water that has to move back out to sea, so the stronger the rip,” says Dalton. “Rips pose a risk to swimmers because they can quickly take people out of their depth and cause them to panic when they realise they can’t swim against the current. People often fear they’ll be taken right out to sea, even though rips normally end at the edge of the surf zone.”

SLSNZ National Coastal Safety Manager and seasoned Surf Lifeguard, Dr Mick Kearney, says there are several things beachgoers can look for to help identify a rip, including calm patches in the surf.

“A patch in the surf with fewer breaking waves might look safe to swim in, but this is often a clear sign that a rip is present,” says Dr Kearney. “If you see areas of deeper, darker water, or a rippled surface surrounded by smooth water, think of it as a river within the surf. Also look out for anything floating out to sea or foamy, discoloured water flowing out beyond the waves. The discoloration is created by the current picking up sand in the water as it moves out to sea.”

Dr Kearney says the location of rips can be difficult to predict – some recur in the same place but others can appear and disappear suddenly and without warning. He says that, while rips are particularly common around rocky headlands, beachgoers should always err on the side of caution.

“The surest way to avoid getting caught in a rip is to stay out of the water if you’re unsure of the conditions or your own physical limits,” says Dr Kearney. “Choose a lifeguarded beach where possible and always swim between the red and yellow flags – Surf Lifeguards are constantly monitoring the conditions and won’t put flags out where a rip is present.” 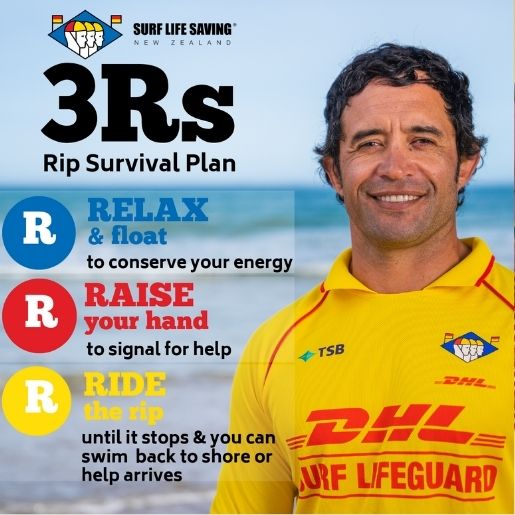 If you do get caught in a Rip, remember the 3 R’s

Relax and float to conserve your energy: Stay calm, relax and float. The rip will not pull you under the water and is just taking you for a ride offshore. Try to fight the urge to swim back to shore against the current – this will use up energy that you need to stay afloat until help arrives. Most people can float for a lot longer than they can swim!

Raise your hand to signal for help:  Signal for help by putting your hand up to attract attention from lifeguards, surfers or someone on the beach who can get help.

Ride the rip until it stops and you can swim back to shore or help arrives: Remain floating until the current weakens. Many rips will circulate and bring you back into shallower waters closer to the shore where you may be able to stand. Only if and when the current has subsided, and you are sure you can swim to the nearest point on the shore, should you attempt to swim to safety.

Dalton says it’s important for Kiwis to get familiar with broader beach safety advice as well. Together with their partner DHL, SLSNZ have developed an online game that is not only fun but reinforces key beach safety messages.

“Most fatal drownings are preventable and following key safety advice is an important tool for keeping your loved ones safe at the beach this summer,” says Dalton