Let me just say upfront that I’m an absolute convert to the Action Cam for family home movies. The size, the portability, the durability and how they allow you to get right in amongst the action makes Action Cams the ultimate family memory-maker. And to that end, the Sony FDR-X3000R Action Cam is right up there.

As it happens I own a Go-Pro Hero 4 and an older Sony camcorder. If these 2 cameras ever got married and had a baby, well that baby would be the FDR-X3000R Action Cam!

This isn’t going to be a Sony Action Cam vs Go Pro style review. But as a Go Pro convert, it will be hard for me not to compare the Sony to that. In my books the Go Pro is the gold standard in Action Cams, so the comparison is high praise for the Sony camera anyway. And as it happens (spoiler alert), I think this little FDR-X3000R has tipped me in favour of the Sony… 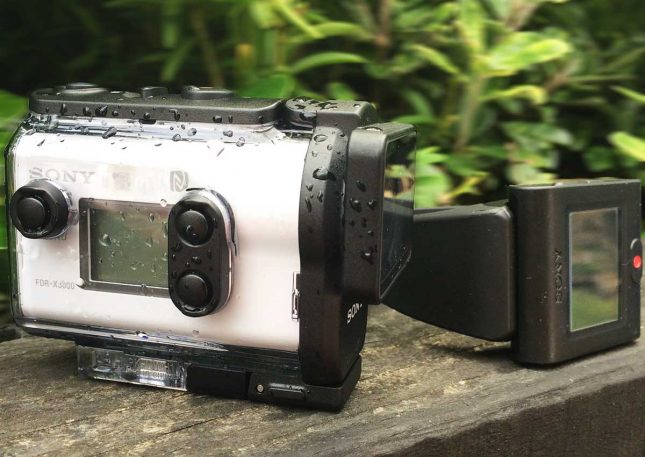 Out of the box

Right out of the box the Sony FDR-X3000R Action Cam looks the business. The bullet-style camera is small, and super-lightweight. With it’s high gloss, white finish, it’s got some real style. It fits really snuggly in the palm of my hand, and is the perfect shape for just holding and shooting from the hip. It comes with a waterproof case that looks sturdy, and with a 60m depth rating, should suffice most needs from strapping on a surfboard, to diving coral reefs.

Also inside the box is the awesome little LiveView Remote. This sweet little piece of kit is what really sold me on the FDR-X3000R. More on that in a minute though.

There’s also a tripod mount and clip mount (as with most Action Cams alternative clip mounts are sold separately), the battery and LiveView charger docs and a single USB cable that takes care of all the charging and downloading.

Charging the batteries off your computer makes maintenance a breeze, and removes the frustration of losing those chunky old power cords! You can purchase a back up battery, which I’d recommend, but I found the battery life was really good. You’re easily going to shoot for over an hour, and with a back up battery, this should be more than enough for most situations.

The last inclusion is a mass of camera instructions, and I mean a mass! I would have liked to see an instruction booklet, rather than a ton of pamphlets that open out, up and sideways like road maps (remember those?). Also, the instructions are less than clear. I think Sony have done a fair job on the instruction manuals compared to previous cameras, but there’s still a long way to go. If you’ve used Action Cam’s in the past, then you’ll be shooting more or less straight out of the box, as I was. If you haven’t, you’re going to spend quite some time trying to make sense of it all.

On the camera itself you’ll find a release for accessing the battery compartment, a compartment for the USB, HDMI and microphone outputs, a menu screen with 3 user-friendly function buttons, the power on/off and record/enter buttons are up on top, and the micro SD/Sony storage card slot is on the bottom. And here’s the first design flaw.

But, the cord that keeps the cover attached is so short, the cover doesn’t move far enough away to access the card slot properly. Now, I have to admit, I do have fat fingers when it comes to fiddly stuff! But I struggled getting that tiny card in and out around the cover. As a keen snowboarder, Action Cams have to be really accessible up on the mountain for me. When I urgently need to replace a memory card to get that one and only shot of my child’s first ski run, I need to know it’ll be quick and easy.

The camera’s waterproof case allows access to all of the camera buttons, as well as a ‘hold’ switch to prevent accidental recording. Underneath the case is the tripod/clip mount, and a small clip that pops the lens cover off the actual camera. And here’s the second design flaw. Again, up on the mountain, I can see that fiddly little clip being a bit of a nightmare with freezing cold fingers… 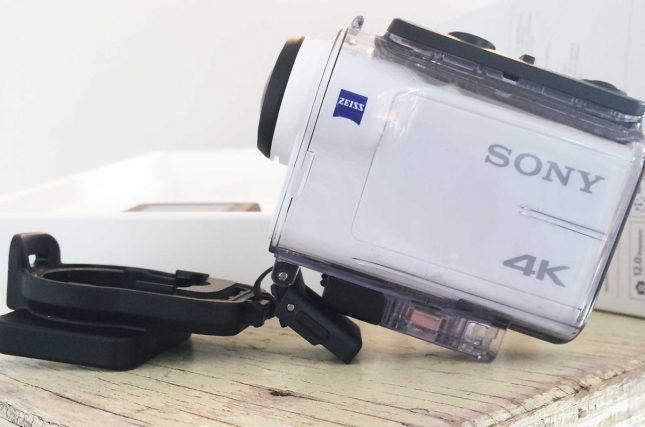 I really wanted to spend a paragraph or 2 telling you about the LiveView Remote. In my humble opinion this is what turns the FDR-X3000 (which you can purchase sans remote) into a true family camera.

I’m a bit old school when shooting film, I still really like to look through a viewfinder and see the action I’m capturing. So, for me, the lack of a view screen on many Action Cams is a huge deficit. Remember, I’m not talking about strapping the camera to a helmet and hitting the downhill mountain bike tracks. I’m talking about family movies. Filming the kids playing at the park, their birthday parties, rocking out on the body board, or the scooter, etc.

Many Action Cams try and solve this with a wifi connection to your mobile phone. But there’s usually a pretty bad delay/choppy video and, quite frankly, I don’t want to risk my mobile phone around sand or water!

Sony’s LiveView Remote syncs to the camera over bluetooth, and the resulting video is great. You can watch the footage as you shoot it, in amongst the action. Or, direct the action from the comfort of your deckchair! From the LiveView Remote you have full access to the camera, turning it on and off, accessing the menu, etc. So you can easily mount the camera on your kid’s helmet and shoot the film from the sidelines. This creates a whole new level of shooting, which is awesome.

The LiveView Remote also comes with a handy wrist mount, which is adjustable down to a 4 year old’s arm at least, which our kids loved wearing. There’s all sorts of extra mounts you can purchase too, including a cool finger mount. But I didn’t mind wearing the watch mount at all. 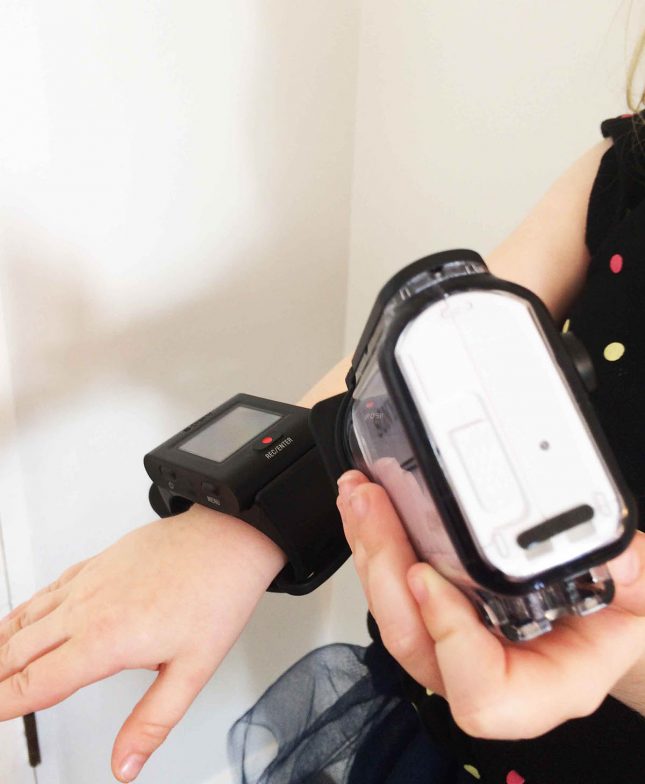 The menu is accessible from the camera or from the LiveView Remote, and is really user-friendly. The menu button accesses the different menu levels, the up/down buttons navigate, and the record/enter button on top enters each menu. The display uses icons for navigation making it simple to use.

In the menu you can switch between the different resolutions 4K, 1080p, 720p and 480p. You can shoot UltraHD resolution 4K up to 30fps (or a more user-friendly slow-mo format of 1080p at 120fps). For family movies you’re never going to need 4k resolution of course (although it’s great to know it’s there), and you’ll find 1080p full HD at 30fps with an 8.2 MP resolution, creates picture quality that your grandkids will still be proud of.

You also have options for loop recording, burst shooting and live streaming. A 3x optical zoom, and 3 different fields of view, and there are limited features for setting white balance and shutter speed. Again, you’ll probably find just setting the camera to auto will take amazing video and stills.

The hardware and video quality

Of course Sony have the IP to some serious lens and hardware technology, and they’ve made the most of that in the FDR-X3000’s built-in stereo mic, Exmor R CMOS sensor, ZEISS Tessar lens and the Balanced Optical SteadyShot (B.O.S.S) image stabilisation. That’s a lot of acronyms I know.

Combined though, this is what gives the Action Cam it’s great sound, huge resolution shooting ability, vivid pictures and stable imagery. This is, hands down, where the Sony Action Cam comes out on tops compared with my Go Pro. I find the Go Pro’s sound quality really quite disappointing, whereas the Sony Action Cam’s sound was great. The FDR-X3000’s stable and vivid images where just amazing to look at. And, if you do want to shoot some ultra-slow motion 4k footage (which you eventually will 🙂 ), then only the Sony camera gives you image stabilisation at that resolution.

I found the software to be the biggest let down overall. Although in practice, I’m not sure I’d ever use it. The camera works with Sony’s PlayMemories mobile app, and connects over wifi.

At first it seems so simple. There’s a QR code on the actual camera, you scan this with your phone’s camera and, that’s it, they’re synched. It took me ages to get this to work though, and the results were pretty poor. I just find the delay over wifi renders the phone useless as a viewer. Perhaps it might be useful to set up as a nanny-cam? Also, I found the app to be less than intuitive. I think there’s some more work to be done by Sony here.

Sony also has a video editing app. But it’s not nearly as good as the app I currently use. And for great results, you’re going to want to download the video and edit it on your desktop anyway. I use Adobe Premier Pro to do most of my post-production, so I find the apps kind of gimmicky.

I think the conclusion on the Sony FDR-X3000R Action Cam is quite simple. If you’re after a serious Action Cam that’s suitable for shooting family movies, this is it. You may want to purchase the seperate finger mount, and possibly a good external mic too. But out of the box you’ll capture all those moments, from your child’s first birthday, to their first body-boarding barrel roll, from their first tentative runs on a scooter, to their first 360 on a snowboard. And you’ll capture it all in high definition, vivid images with, hopefully, some insane slow-mo footage to boot!