At 4 years, my youngest child William would draw the most elaborate pictures. He would draw cars with steering wheels, wing mirrors, and indicators. I admired William’s confidence to draw in his own way. By the time William was 6 his interest had changed.

He would say, “I can’t draw, you do it for me”. Drawing was no longer enjoyable for him, and many works went into the bin because they weren’t what he considered ‘good enough’.

This posed a question in my mind – what happened for William? How could I prevent the same thing happening with our other children?

Why is drawing important for children’s development?

Children draw to express what they are feeling and thinking.

The first writing of the human being was drawing, not writing. (Marjane Satrapi)

Drawing is an especially important outlet for children who do not yet have the verbal skills to communicate their feelings.

When a child draws something familiar to them, for example, a cat, they have the opportunity to think about what they know and how they feel towards this animal.

They also use their memory to recall what they know about cats, in turn extending their concentration and thought-processing skills.

Drawing also helps to develop manipulative skills that will assist children to write. These dexterity, and fine motor skills, are also applied in 101 different activities using their hands.

5 reasons drawing is important for your child’s development

Each child’s art is unique and follows a universal pattern of development.

All children go through the same stages but the age at which this happens varies. The first stage is ‘experimenting’, where young children learn how to make marks on paper. The objective here is to see what they can do through practice and repetition.

When children gain greater control of their pens you’re likely to see circular patterns and the work taking less of the page. As children are able to consistently create circles and lines, you may see circles with lines radiating from them.

The next stage is where these circles and lines start to become objects like people, as children are able to represent what they’re thinking about. With continued practice finer details start to appear such as people having fingers and eyebrows.

2. Colouring in books may hinder development

Some research has indicated that colouring in books may restrict some children’s creativeness and their independence of expression. Some children may use the drawings in these books as a model of what an object should look like.

If a horse looks a certain way in the colouring in book, children may believe that their horse should look the same. They may also feel a sense of not being able to achieve what is expected as they cannot colour within the lines provided.

This could restrict their ability to draw with feeling and emotion and to represent objects as they see them rather than how the lines portray them. Art is about discovery, using imagination, experimenting and trying out new methods and expressions.

You know your child best, their temperament and capability, so you will know if colouring in books are a useful tool or not. 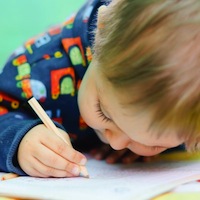 My Nana was an amazing knitter. She taught me how to knit at the age of 6. My knitting was nowhere near as good as hers no matter how hard I tried. The idea that perfection will come with time and practice did not occur to me until a much later age.

Your children may think the same about the drawing you do for them.

A child that is confident with their own work will rarely ask you to draw for them.

Around the age of 3½ children may start to have a plan for what they’re drawing. However, as adults we don’t know what our children’s intentions are. It’s a good idea to talk about what your child is drawing because it shows interest, but it’s important not to label the unknown.

A general statement like ‘can you tell me about your picture’ is a good conversation starter allowing your child to tell their story.

Displaying your child’s artworks on the fridge or making a frame for special work shows them that what they’ve done is important.

Children need a variety of items to draw with and draw on.

These could be pens, chalk, crayons, paint and brushes. Items like paper, cardboard, boxes, concrete, or even the fence, are good places to draw on.

Start drawing experiences as soon as your child shows interest; usually from around 8 months. If you don’t want delightful artwork added to your walls it’s best to have a regular ’drawing place’, like a small table and chairs, and rules about the pens staying on the table.

The best paper has no lines so children are not confined when they first experiment with making marks on paper.

You could even try taking your drawing materials outside under a big tree in fine weather. Another idea is to paint the fence or concrete with a mixture of water and a few drops of food colouring, this washes off well in the rain.

The point of all of this is to help expand your child’s horizons. Drawing is so much more than pencils and paper. But if we create too many rules about where, how or what we draw, then we may stifle our children’s creative thinking; before they’ve even had a chance to develop these important skills.

Now that you know why drawing is so important for a child’s development, find out what the benefits of creative play are. For more inspiration check out our Preschoolers activities section.

Sue Hunter is mother of 4 boys and has a wealth of early childhood experience including lecturing on the subject. She has a special interest in how trauma and neglect can impact upon children’s learning and development. Sue believes that strong connected families are the building blocks to a healthy society.

Play activities such as drawing, painting, cooking, dance, music, sports, etc. ignite imagination and creativity leading to overall development. Parents should realize the importance of such activities for their kids.
https://medium.com/@hapclap/when-children-play-the-world-wins-2a722e906aa6

Yes, I agree with you. Drawing is one of activities that make kids get good develompment. This article has become my blog reference in local language. here is the article: http://www.rubrikanak.com/meningkatkan-tumbuh-kembang-dan-jiwa-seni-anak-dengan-media-menggambar-dan-mewarnai/

I totally agree with the article. The importance of drawing as part of a child’s development cannot be emphasized more.