In the third edition of our Side Hustle Series Cat Macnaughtan, Next Magazine Her Own Business Award nominee and creator of the massively popular card game Getting Lost Game, teaches us how tuning in to what the customer really wants is the key to success.

I didn’t plan to run a successful home business with a six figure turnover.  I certainly didn’t plan to do it while raising three children and working 40 hours a week in my day job.  But 18 months after saying to my husband James “I reckon we should make a game that gets people lost” that’s exactly where we are.

I’m Cat and I’m the founder and co-owner of Getting Lost.  I guess you could also say that I’m a game inventor, manufacturer and online retailer.  Yikes, now we’re sounding scary…

Our journey to becoming all of the above began as a bit of a project.  I, like many parents nowadays, had a couple of side hustles. Passions projects that bought in modest amounts of extra cash that I loved doing.  My side hustles comprised of a family photography business and a travel blog that I started in 2015 called Getting Lost.

So I started thinking about what we could create.  I’d sit there at my 9-5 riffing ideas with my co-worker about a game I had in the back of my head.  Offline, simple, portable, able to be played anywhere in the world, all ages and guaranteed to get you heading in a new direction every time.  It was a tall ask.

The concept would have stayed exactly that if it hadn’t been for the thing that usually spurs us on to action – money.  Or rather a lack of money. A couple of (as it turns out later) fortuitously placed obstacles saw me sitting in the lounge of our Birkenhead house saying to James “I reckon we should make a game that gets people lost”.

Less than a week after our first conversation we had a prototype.  Seven weeks later we’re selling the Getting Lost Game online.

We sold out multiple times in those first few months and we made oh so many mistakes as our business grew at a frankly alarming rate and we scrambled to catch up behind it.  Some of those mistakes still make me cringe, some are downright terrible and some hilarious. I’ve kept a diary and I reckon maybe some day I’ll turn it into a book of how not to run a business.

But somehow, as we stumbled our way through with the strategic nous of a drunk person in a maze, we arrived at the point in 16 short months were the Getting Lost Game had: 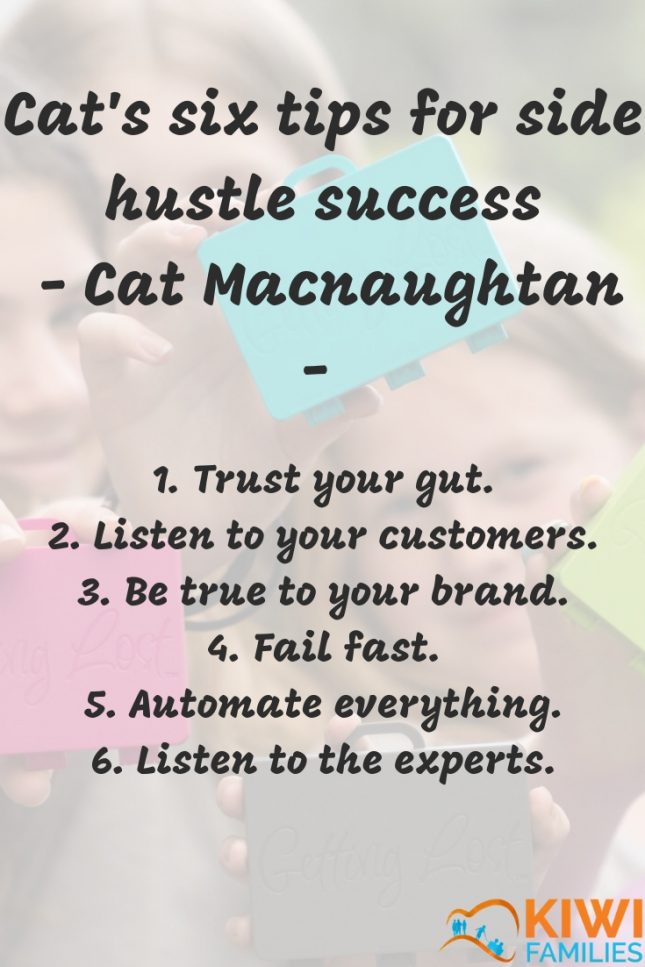 We’ve learnt so much over this time about how to (and not to) run a business and to make, distribute and market a product. Here’s my 6 best tips.

We’d never have got any of this off the ground if we didn’t take some massive leaps of faith.  From the very first moment we pressed go on our first print order of 250 cards to the terrifying moment when we put $30,000 for an injection mould across all of our credit cards we’ve led with our gut feel.

2. Listen to your customers.

The idea for the Getting Lost Game came from our readers of our blog and the followers of our Facebook page.  But we didn’t stop there. We sent out surveys after they bought the game to see what they liked (and didn’t).  The initial feedback was brutal! But we incorporated it all and it made the game better. We crowd sourced a new edition of the Getting Lost Game.  We ran votes for new colours and cards. Every step making sure our customers owned the game as much as we did.

Know what your brand stands for, what it does and doesn’t do and be true to it.  It’s so tempting to give in to quick wins that just aren’t right for your brand.

I know it’s a catch phrase but it’s really true.  Especially in small, agile businesses. Experiment in everything.  If it works keep doing it. If it doesn’t, move on. We’ve experimented with everything from new product design to packaging to advertising formats to media channels to advertising copy to sales mechanics.  I’ve spent 20 years working in advertising and I’m still being surprised by what I’ve learned in the last 16 months just by experimenting.

I’m still slow to the party on this but honestly, it’s the best thing you can do in business.  I remember the day we bought a new label printer that automatically prints labels from our courier interface (which gets them from our sales interface) and I had tears in my eyes.

6. Listen to the experts.

We have a veritable team of experts around us now.  From Patent Lawyers, to Accountants, to Translators, to Printers, to Tool Manufacturers, to Business Advisors and Mentors.  And we make the most of every support network we have. I’d thoroughly recommend joining a business support network and making the most of any free help your local council gives or the various Government schemes.

Good luck out there.  xx