Toddler tantrums – and how to manage them

I used to think most tantrums could be fixed by walking away. That was called planned ignoring. The alternative was to say “stop that yelling,” and, if the child persisted, to punish them by putting them in Time Out until they calmed down.

Once I had grasped the idea of using emotional distance (see the Time Out article) rather than praise or punishment, I was still left in a quandary about tantrums. Was the child in need of my support or was he simply being unreasonable?

Nowadays I understand that not all tantrums are created equal.

We can be more effective in helping our children deal with their feelings, which threaten to overwhelm them, if we can recognise what type of tantrum your toddler is having. 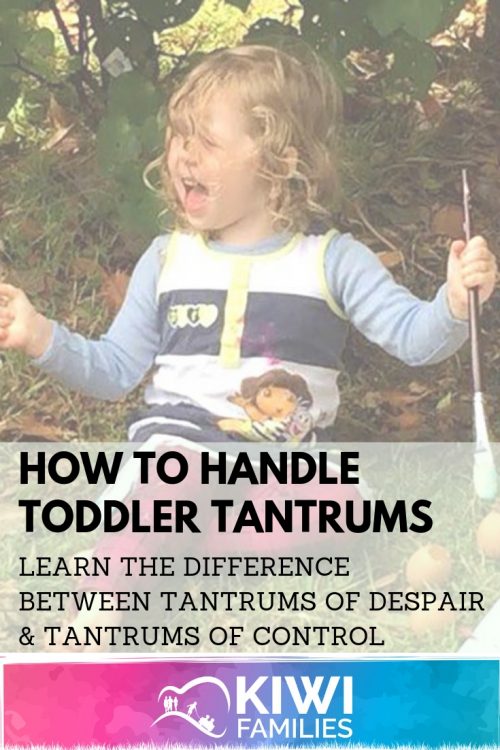 And the nominations are…

Just think of watching an unknown child having a tantrum, complete with wailing, crying and screaming, in a supermarket. Some of us think, ‘Oh, that unfortunate child. He’s probably been out for too long and is exhausted.’ Others think, ‘Why doesn’t the mother do something with that noisy little brat? He’s just having her on.’

We’ve all experienced the dreadful feeling when our child is having an out-of-control tantrum in a public place. At that moment, we tend to beat ourselves up, believing that ‘good’ parents can foil tantrums from the outset.

These days, if I see a Mum struggling with a tantrumming child (I just made that word up), I tend to think, “oh you poor thing – who’s going to help you?’ And it’s the parent I’m fretting about here!

Hmmm… is this despair?

There are times when our children can be really upset or distraught.

Their friend hurt their feelings; they whacked their elbow on the table; they were promised a visit to the playground and now it’s raining hard; part of a toy is broken and Mum just turned down a request for that second helping of chips. Our child may be angry, tearful or both.

Our child needs us to understand how upset they are and to have us put their feelings into words. Ideally, our tone of voice needs to match the intensity of their feelings.

“Your feelings must be hurt by what your friend said.”

Tantrums of despair require our emotional support. Simply keep your arms around your child, make comforting sounds and wait until your child has regained their equilibrium and can try again or leave it alone.

Or is this… control?

Strong-willed children are more likely to scream rather than cry and will use an anger tantrum to try and force us to change our mind.

If running away or yelling isn’t helping them, they can often resort to pushing or hitting, shouting unacceptable words or even spitting to try and get their own way.

Essentially, there is little point in trying to reason (or argue) with them. Our children are so enraged they won’t listen to anything we have to say. Attempting to make logical and reasoned explanations is pretty much a waste of energy when our child is “all feelings and no thinking.”

Trying to distract them is almost impossible with an angry, determined child and threats of punishment rarely stop the rage. A child who isn’t in a calm thinking state won’t be able to understand the potential consequences of where his behaviour is taking him.

Tantrums of control require us to distance emotionally from our child until they’ve worked out that they’re just not going to get their own way on this one.

How can we tell which way to go?

Support or distance? I suggest you check your feelings. Are your feelings ‘poor little thing’? In this case your poor little thing probably needs your emotional support. However, if your initial response is anger and you’re feeling ‘oh, you little …’ then chances are your child is having a tantrum of control.

Just to be really sure

Try empathy first. Ask, “do you need a cuddle?” Your child will come to you for comfort if it’s a tantrum of despair, or at the very least the tantrum will wind down a notch. Be there for your child, and wait until they’re ready to come to you.

But, if they shout, “I don’t like you! Leave me alone!” then it’s most likely a tantrum of control and you need to create some distance. Walk away or place your child in their room. They’ll kick and scream a bit, but the distance will allow you to both find a calmer state.

After some time by themselves, many children will move from being angry to being upset. They’re now ready for a comforting cuddle.

In either case, what we’re after ultimately is that our child solves their problem and comes up with their own pro-social solution.

It may be to stop yelling and get on with the rest of their day; it may be to let their little brother or sister have the block; it may be to leave the puzzle alone and find a more co-operative toy to play with; or it may be to do what Mum has asked.

With emotional support our child feels comforted and understood and can calm down and think of a way to go about solving the problem.

Or, from a position of emotional distance, our child can decide that their current behaviour is getting them nowhere and they’ll need to behave differently.

Either way, we’ve kept the problem with the child; we’ve not moved to rescue or persecute. Our child has solved the problem and is demonstrating age-appropriate competence.

An over-tired or over-stimulated child can lead to a third type of tantrum – one I refer to as ‘too much day’ tantrums. These tantrums often occur after our child has had a perfectly wonderful party or outing and had a very enjoyable time. Everyone has told us, the proud parents, how well behaved and lovely our child was.

Yet within a very short space of time, the little angel has turned into a nasty piece of work, complete with flailing arms and legs, not to mention a temper, as soon as we leave the situation.

So what went wrong? We have gone to considerable lengths to ensure they had a good time and this example of bad behaviour is what we receive?

Essentially, having a great time can also be very exhausting for our children (it took me a long time to understand this), so when their tiredness catches up with them, they tend to “lose the plot.”

Of course there’s no magic answer; usually we simply have to get through the circumstances as best we can. A calm and quiet bath and stories before bed, plus a good night’s sleep can do wonders for restoring our children to their usually delightful selves.

Their tendency is to behave as if nothing has happened. We, however, may still be recovering!

Some useful articles and resources

For a great overview on the purpose of parenting try The Big Picture: Guiding your child’s potential, or Growing Great Families. For more expert advice on raising toddlers, check out our Preschooler: behaviour section.

Diane Levy’s warm, humorous, practical and commonsense approach to raising children is evident in her writing, her speaking and her private practice in Auckland as a family therapist. Her main focus is on coaching parents. She is also the author of the best-seller “Of course I love you…NOW GO TO YOUR ROOM”, “They look so lovely when they’re asleep” and “Time Out for tots, teens and everyone in between."

These are insightful and useful strategies that have hit the nail on the head for us. The ‘too tired to cope even though the day has been awesome tantrum’ has been a relatively new struggle for us.
To add to this, ‘always carry snacks’ is the best advice we were ever given in order to combat the ‘hunger hulk’ that is a toddler with low blood sugar…
Great article. Thank you.